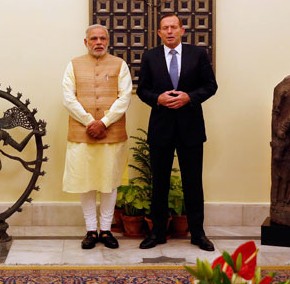 Hot this week: Back to India for two looted National Gallery of Australia pieces.

Experts seek to save Haiti’s archaeological sites
(31 August 2014, Phys.Org)
A real push to try to protect Haitian historical artefacts. Things like cannons and such are a target, not to mention shipwrecks.

Underwater archaeologist, Dr. Lee Spence seeking artifacts allegedly looted from Bahamas shipwreck
(5 September 2014, The Bahamas Weekly)
Allegedly 40 iron cannons were looted from a Spanish galleon wreck north of Freeport. The looters apparently used a large, blue hulled salvage vessel. If ANYONE has seen anything along these lines in either the Bahamas or in Florida, or if you know anything about this (seen cannons for sale? heard of weird scrap dealings) please email HunleyFinder@Yahoo.com.

Manhattan U.S. Attorney and FBI Assistant Director in Charge Announce the Repatriation of Nine Stolen Miguel Cabrera Paintings to the Republic of Peru
(5 September 2014, FBI Website)
The pieces were stolen from a church in Lima in 2008. Eight of them were tracked to an auction house in Iowa who turned them over to the feds after the feds, well, told them to turn them over. The last painting was found to be at a New York auction house. Because everyone involved in this just handed back the paintings, it looks like there will be no prosecutions of these people for handling stolen goods. They are just out whatever money they paid which, frankly, isn’t enough.

Two Alaska Native artifacts return home after clandestine auction bid by nonprofit
(3 September 2014, Alaska Dispatch News)
Another complicated and sad case where Native American pieces ended up being bought at a European auction so that they could be returned. This is not a solution to the problem, it is a problem in itself.

The Heir’s Not Apparent: A Legal Battle Over Vivian Maier’s Work (US)
(5 September 2014, New York Times)
A complicated situation: an amazing street photographer dies with no clear heirs and her work is scattered to whoever is buying it up for far less than they should be paying for it.

Met Wins Latest Round in Clash Over Ancient Sicilian Silver
(3 September 2014, ArtNet News)
I am not sure this is really a win, so to speak, but the Morgantina silver, which was horribly looted and repatriated to Sicily in 2010, is going back on display at the me as per the repatriation agreement.

Australia to return ‘stolen’ Hindu statues to India
(5 September 2014, BBC News)
Australian taxpayers: your museum spent millions on these. You should be very angry at them for buying obviously stolen goods. You aren’t going to get the money back from the dealer, it is just gone.

ASI Protection Not Theft-Proof (India)
(7 September 2014, The Sunday Standard)
With 22 reported idol thefts in the past 6 years, this short piece is sort of a rundown of all of them.

A brittle plan to protect broken idols? (India)
(3 September 2014, The Times of India)
A discussion of the storage conditions of many Indian idols. The author believes that they are poor and this is what leads to damage and theft.

Owner didn’t deposit all antiques found in Bathinda with govt (India)
(3 September 2014, Hindustan Times)
A shop owner in Punjab is accused of not turning over to the Archaeological Survey of India all of the artifacts he found during construction work.

‘Ban Chiang’ artefacts arrive from US (Thailand)
(2 September 2014, Bangkok Post)
The 557 artefacts looted from Ban Chiang and trafficked into the US where they ended up in the Bowers Museum in California have been returned to Thailand.

A note: I have included a couple articles here on IS+antiquities, but have left out most that were published this week. It is getting to the point where all these articles do it quote each other and offer nearly nothing of any substance. Stories about stories are becoming the story and I don’t think that is helpful or useful. I don’t think a lot of the reporting is solid and believable anyway. From this point on I am only going to include IS+antiquities stories if they either have something new and useful to offer or if they are so bad that they need to be publicly shamed.

Raider of the lost art: Afghan saves nat’l treasures
(1 September 2014, PhilStar)
A look at Omara Khan Masoudi who led museum workers in transferring cultural property to secure locations in Kabul in the 90s before the museum was bombed and looted.

Red Army Flags Stolen By Assailant At Bishkek Museum (Kyrgyzstan)
(1 September 2014, Radio Free Europe)
A museum worker was attacked and 2 Soviet-era flags were stolen from the Mikhail Frunze Museum. Well, sorta…they stole COPIES of the flags. The originals are in Moscow.

ISIS’ Antiquities Sideline
(2 September 2014, New York Times)
A far more logical assertion out of the region. IS is not actively looting archaeological sites themselves and selling the pieces (which, of course, would be remarkably stupid and unprofitable), they are place a tax on looting archaeological sites and skim off the top. I, of course, want to see the real evidence for this, but at least this is less unreasonable than most of what is being printed.

Is ISIS Bankrolling Terrorist Activities with Stolen Antiquities?
(2 September 2014, ArtNet)
In contrast is this article which is unnuanced and cites…journalists. At least they quote Sam Hardy at the end as a voice of reason.

Islamic State makes millions from stolen antiquities
(2 September 2014, Al-Monitor)
Nice to see Trafficking Culture mentioned in this article, but I can’t support nearly all of the numbers quoted in this piece. These IS news items are all starting to swirl together.

Archaeologists Train “Monuments Men” to Save Syria’s Past
(3 September 2014, National Geographic)
Please stop using “Monuments Men” to describe real work that people, many of them women, are trying to do. Seriously. It cheapens the content of any article. There is some good enough info in this piece though so don’t let my ranting keep you from it.

Investments in Antiquities Pay Off in Museum in the South of France
(2 September 2014, New York Times)
A profile of antiquities collector Christian Levett. The article notes there were “London critics challenging the collection”, and of course Levett claims perfect provenance…

Cornelius Gurlitt: Monet found in art hoarder’s suitcase
(5 September 2014, BBC News)
You know, the slow reveal of these pieces is actually pretty exciting. I like it.

Russia’s Supreme Court upholds sentence in Gutenberg Bible theft case
(4 September 2014, RAPSI)
If you recall, the sentence is against former FSB officers and the bible was taken from Moscow State University.

A chronicle of efforts to trace antiquities looted in WWII (Greece)
(4 September 2014, Ekathimerini)
An interesting long read about the loss of Greek antiquities during WWII.

Metal detector enthusiasts denied detecting by beach owner (UK)
(1 September 2014, Canterbury Times)
A group of metal detectorists are upset that the Whitstable Oyster Fishery Company has told them they can’t detect on a private beach. The Company says they have NEVER given permission to detectorists and the detectorists claim they have been detecting there (seemingly illegally) for years. Huh.

Mystery holes on Malvern Hills are blamed on rogue metal detector enthusiasts (UK)
(6 September 2014, Worcester News)
Detectorists are looting this scheduled ancient monument. About 50 holes have been found. This is, of course, illegal.

LARPing Enters the Archaeological Record (UK)
(3 September 2014, Science Blogs)
After two metal detectorist stories comes this and it is pretty awesome. Coins used as part of Live Action Role Playing are being found by confused metal detectorists who, I don’t know, probably think they are worth something.

Yeti footprint photos could fetch over USD 8000 at auction
(31 August 2014, Business Standard)
The photos were taken by Eric Shipton during the ’51 Everest expedition. Included because a) I have an Everest obsession, and b) Yeti cultural property trafficking is a thing.

Dinosaur Fossil Smuggled Into U.S. As Replica Is Actually Real: Feds
(5 September 2014, NBC)
Importing using the same methods as antiquities: pretend it is a fake.