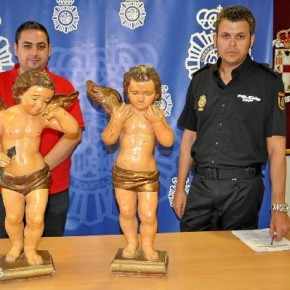 Tired of selling guns and drugs? Try art theft — another profitable criminal endeavor.
(24 July 2014, Washington Post)
Better yet, don’t. Some reporting on an art crime conference that somehow fell off my radar.

How to Interest Today’s Collectors in Antiquities—or Anything Earlier than the 20th Century?
(21 July 2014, Art Market Monitor)
I think the world would be a better place all around if we figure out how to DISINTEREST today’s collectors in antiquities.

After Drugs and Guns, Art Theft Is the Biggest Criminal Enterprise in the World [SIC]
(22 July 2014, Newsweek)
THIS IS NOT TRUE.  Even if it was, there would be no proof. Show me the numbers. Interpol specifically says it is unknowable. If you hear this false statement, fight against it. Repeating false statements like this is destructive. Shame on you Newsweek and shame on whoever repeats this junk.

Dance of the Maize God: a beautiful film about the pillaging of the Maya past
(24 July 2014, Anonymous Swiss Collector)
My review of a great film about the looting of Maya vases.

Saquean piezas y tesoros arqueológicos en Guatemala (Archaeological pieces and treasures looted in Guatemala)
(21 July 2014, HistpanTV)
Although the looting of Maya sites is obvious in the country, no one in Guatemala has been arrested for antiquities looting or trafficking this year, down from 12 last year.

Skull-donation mystery leads others to turn in human remains
(20 July 2014, Seattle Times)
Three, skulls, one at least Native American, donated to Goodwill. After the news report, others are turning in skulls. Sounds surprising but it kind of isn’t.

Norton Simon Museum Asks Court to Reconsider Nazi Loot Claim
(23 July 2014, ArtNet News)
This is the one concerning the Adam and Eve Cranach.

Owens Valley relic hunter not one to back down (USA)
(24 July 2014, Los Angeles Times)
Profile of an unrepentant serial artefact looter.

Ancient Bible Focus of Lawsuit Between Contentious Jewish Families (USA)
(23 July 2014, JP Updates)
Was this historic bible lent? Was it given? Was it found in a suitcase? Who owns it?

Walker and the Restitution of Two Benin Bronzes (Nigeria)
(27 July 2014, Times)
A first-person account of the return of two stolen Benin bronzes to Nigeria by Peju Layiwola, who has worked hard on this topic. Long but a worthwhile read to understand that situation.

Two dozen antique coins recovered at Cairo airport
(26 July 2014, Ahram Online)
The coins date from the Islamic and Modern periods and were found in the luggage of a Sudanese citizen. They will be put in the temporary display of seized artefacts that are going on which, by the way, is a super cool idea. Maybe all recently seized items should be displayed the world over.

Stolen 18th dynasty relief returns from Germany (Egypt)
(23 July 2014, Ahram Online)
Taken from the tomb of 18th dynasty high priest Sobekhotep in the Nobles necropolis on Luxor’s west bank and appeared on the market in the 1980s.

Boom in Chinese art has roots in traditional passion for collecting
(21 July 2014, South China Morning Post)
Includes a short bit on private Chinese collectors buying looted antiquities and other cultural property abroad with a sort of ‘bring it home’ mentality.

Chinese Tycoon’s Ancient Tea Cup Sip Sparks Social Media Storm
(26 July 2014, NBC)
He paid $36million for a 500-year-old ‘Chicken Cup’, he took a drink from it, and now he gets flack for it. We’d all be silly to think that private collectors like this don’t do weirdish things with the objects that they buy.

Sculpture mystery: Stolen Indian artwork in Canadian custody raises minor diplomatic storm
(22 July 2014, India Times)
A 12th century Khajuraho sculpture is in Canada and India wants it back. Canada says that there must be “proof” it was stolen which, of course, means a secure ‘findspot’ or proof it was in a specific temple. Grrr.

Museum Of Little Secrets (India)
(26 July 2014, Outlook)
Sunil Upadhyay of Calcutta’s Indian Museum has disappeared and many suspect foul play. Colleagues say he was speaking out against high level corruption in an institution that recently had problems with fakes.

S. Korea, U.S. to agree on cooperation in return of looted artifacts
(22 July 2014, Yonhap News)
Great news: a cultural property bilateral agreement between the two countries will go through. I suspected this was coming what with recent high-profile returns.

Goryeo Buddhist paintings are ‘resting place’: Ven. Hyedam
(27 July 2014, The Korea Times)
Ven. Hyedam, a Buddhist nun, has devoted her life to recreate Korea’s Goryeo paintings because 90% of them are outside of Korea in foreign collections.

Finders Keepers? (Turkey)
(21 July 2014, Daily Sabah)
This OpEd, ultimately, argues that words like ‘looted’ or ‘stolen’ should not be used to describe illicit cultural property, but neglects to include the infinite cases where cultural property has, indeed, been looted and stolen (and trafficked, and laundered, and smuggled).

The international team trying to save Syrian antiquities
(21 July 2014, BBC News)
My friends at the University of Pennsylvania Cultural Heritage Centre doing good work in a bad situation. I and my colleagues will be visiting Penn in November to give a lecture.

Iraq’s Long-Lost Mythical Temple Has Been Found…and Is In Danger of Disappearing Again
(24 July 2014, The Daily Beast)
Archaeological discoveries in a war zone…not great.

Court Case Claims Australian Art Market Is 30 Percent Forgeries
(22 July 2014, ArtNet News)
This is an Australian Supreme Court case against Christie’s, Australia concerning an Albert Tucker bought at Christie’s but declared during resale at Sotheby’s to be a fake. A bit of an overblown, crazy claim but it has been made.

Traditional owners open hidden Eden (Australia)
(27 July 2014, The West Australian)
In 2008 traditional custodians were awarded native title for the Birriliburu area and it was soon closed by them as tourists took it upon themselves to loot the place. Now after protection training, it is being opened to visitors once again.

Million-euro Marble Statue Seized in Greece
(24 July 2014, Greek Reporter)
…and a Greek antiquities police officer is one of the eight people arrested in this gang. Very disturbing.

Two men jailed after village shoot out (Cyprus)
(22 July 2014, Cyprus Mail)
One of the people involved in this was convicted of possessing stolen antiquities. Peristerona village, Nicosia district.

Macedonia court sentences 12 in antiquities theft
(25 July 2014, New Zealand Herald)
This includes two senior heritage officials and has happened after a 10 month trial. All were given prison terms between 2 and 7 years.

Centenary sparks WW1 price war (UK)
(21 July 2014, IOL Science)
Auction houses warn families and private collectors to make sure their WWI memorabilia and herlooms are properly ensured as prices for them are going up, as are thefts.

Experts condemn British government for failure to ratify convention protecting cultural property
(21 July 2014, The Art Newspaper)
That is right, folks, the UK has not ratified the Hague Convention.

885 Artworks Missing from Madrid’s Prado Museum (Spain)
(22 July 2014, Artnet News)
Quite the shocking headline but perhaps an unfair one. Most of this happened ages ago. See below.

Press Release (Spain)
(24 July 2014, Museo Nacional del Prado)
The Prado’s press release response to the previous news article. They say that the information is nothing new, has been known about for decades, and they offer real numbers about the situation. A must read if you read the news report.

Mannerheim Cross worth 40,000 euros stolen from museum (Finland)
(23 July 2014, YLE)
I am told that these crosses are not only numbered and known, they are almost holy. Only 197 of them. Just shows how strange and strong the illicit market for WWII items are.

Hopi and Navajo Masks Auction Precedent in France Is Too Dangerous
(25 July 2014, Artnet News)
An opinion piece about the recent auctions of Native American pieces in Paris and, specifically, the rulings that allowed them to go through.

Men caught with stolen native animals from national park (Australia)
(July 2014, Courier Mail)
Quite a few of these animals found in their possession and in their home. Animal smuggling is a thing.