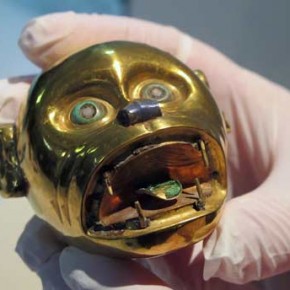 The New Mexico History Museum has just announced that is is returning a particularly dubious (and well known) artifact to Perú.

The gold monkey head in question was donated to the museum in 1995 by John Bourne, the notorious receiver of some of the looted material from the famous Moche site of Sipán. To make a long story short, evidence seems to indicate that Bourne and the museum knew full well that the head came from the Moche site of La Mina, which was ransacked in 1988 shortly Sipán, that the object left Perú illegally, but that they didn’t care.

In 1998, the FBI seized the head as part of investigations into the looted Sipán material. The museum stated that they would return the object IF anyone could prove that it came from Sipán (presumably in a court of law). In 2000 the head was returned to the museum because the district attorney’s office felt the case was weak. And it was…if the object WAS from La Mina (and how do we know it is? Various news agencies are reporting that it is from Sipán), it was just as horribly looted as a Sipán object but maybe not (?) subject to the emergency import restrictions in place for Sipán material. Bourne, of course, got a massive tax write off for donating the thing.

In the press release from the New Mexico history museum, Bourne is quoted as saying:

“I’m glad that the artifact was available for many New Mexicans to see during the time it was on display here and I support the process of due diligence that has led to it returning to Peru.”

The darker part of my illicit antiquities sole requires me to say that New Mexicans are far more able to get to Perú to see a museum than Peruvian are able to get to New Mexico. Also, that dark spot in my soul notes that Bourne probably supports both not getting arrested and having dumped a hot object while getting a substantial tax deduction.

But it is going back!  A new day has dawned! A page of my master’s thesis is now outdated! Three cheers for the New Mexico History museum getting their act together!